Back in the day when I first got my foot into the door of the fitness world, I’m a shamed to say; I was in love with Splenda.

I would use it in pretty much everything I made. I made pies, cakes, cookies, shakes, you name it and I probably made it with Splenda.

Luckily that only lasted maybe a year and I started reading some information about Splenda that didn’t make me happy.

I found out Splenda wasn’t good for me. She was the poison on the vine.

Literally; according to Shane Ellison sucralose was accidentally discovered in the 1970’s by researchers looking to create a new pesticide. It wasn’t until one of the researches accidentally tasted his new “insecticide” that he learned it was sweet. From that point on it was marketed as a low calorie sweetener.

When I found this information out I was pretty grossed out. That alone made me hate Splenda but unfortunately I also found out that there were a lot of symptoms that came with Splenda consumption, some of which I experienced myself.

According to Dr. Mercola the following symptoms have been observed within 24 hours of eating Splenda:

As you can see these are some pretty nasty symptoms. I used to get itchy eyes and a stuffy nose the day following a desert I made with Splenda.

I never put two and two together. At that age I had no clue.

So I went on without Splenda and I’ve never used it again. I went years without using any sweeteners. But about a year ago I found out about stevia.

I made sure I did the research this time before I even considered using it.

I found out that this sweetener was derived from a species of the stevia plant called Stevia Rebaudiana.

The problem I had with a lot of artificial sweeteners was that they were made from chemicals that harmed our bodies. Stevia on the other hand is made from a plant and in low doses it even has anti-inflammatory and anti-oxidative effects.

Now, just like anything in this world, too much of something can be a bad thing. Stevia’s no different. In a study conducted they found that large doses of stevia can cause infertility.

We’re talking really large doses though. The only way this would happen is if companies start using it in everything just like they do with Splenda or other artificial sweeteners.

I don’t recommend using Stevia like I used to use Splenda; making pies, cakes and cookies. If companies do decided to start using it in packaged foods and marketing it as healthy don’t fall for the hype.

I only recommend using stevia in your coffee.

Keep an eye out for the fakes

I always tell people it’s really important to read the ingredients of the packaged foods you buy.  I’ve been noticing a trend in a lot of “Stevia” products like Truvia, Stevia in the raw, etc.

They market the stevia product as “stevia” but when you look at the ingredients a lot of the time the first ingredient (which is the most used ingredient) is dextrose.

Always read the ingredients and check for 100% organic stevia. 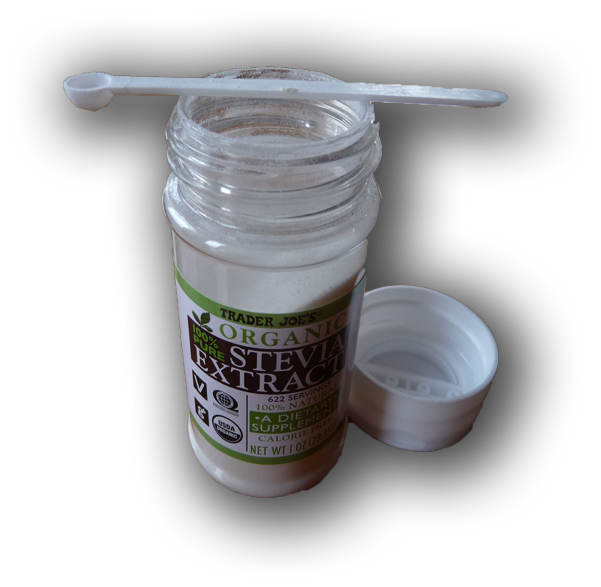